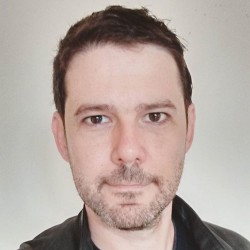 Why async programming is not worth the trouble

In this post I want to explain why the performance and scalability improvements that you’d gain with an async architecture are usually neglegible, while the cost in increased complexity is very real.

I’m assuming you’re familiar with how asynchronous and synchronous I/O work. If you’re not, you can read the standard node documentation about the subject. It includes the usual rationale about why async I/O is faster.

Async vs sync in practice

The following code implements a simple HTTP service that reads some bytes from the file system and answers with an 200 OK response. The filesystem read simulates the kind of I/O that you’d have in a real application, like accessing a database.

I’m reading 1MB which may seem too much, but that highlights the effects of I/O and given the recent website obesity crisis it’s actually a fairly standard weight for a web page these days.

To test the performance of this code I’ve used the excellent apache benchmark tool. I made 100 requests, with a maximum concurrency of 50 and measured the response time1. It took ~10.5 seconds to complete.

Now let’s write the same server in a synchronous way:

Something to note in the sync version: there’s less nesting in this code, which makes it easier to follow. In the async version, every I/O operation is handled by a callback that must check if the operation succeeded or not. That adds conditional logic, nesting, and makes the whole flow more convoluted.

Nesting might not seem a very big deal in a small program, but it can become unwieldy pretty soon in a bigger system in which you need to execute one I/O operation after another.

Callbacks can add so much complexity that they often lead to a callback hell.

So, the synchronous code looks simpler, but how does it perform? Measuring it, the sync version takes ~ 14.2 seconds, or 35% slower, hence your usual claim that sync APIs are slower.

So far async I/O seems a reasonable tradeoff to make: you pay some increased complexity but you get a faster system.

However, that sync example is somewhat contrived and doesn’t represent how you would run a sync application in production. Every framework doing synchronous I/O already knows that the program execution will be halted during I/O and it’s prepared to deal with it. Application servers usually run in a multi process or multi thread mode.

In a multi process mode you have a pool of processes, each waiting for a request. When a process is blocked doing sync I/O the operating system schedules another one that it’s free so you can serve multiple requests concurrently.

The multi thread mode is similar, but instead of a pool of processes, you have a pool of threads. A thread requires less memory than a process, but it also gives you less guarantees in terms of isolation, so there’s also a tradeoff here between simplicity and efficiency.

Let’s see how a clustered solution would look like:

This example is similar to the sync one, but instead of only one process I’ve created 10.

Clustering is a good practice even if you are only using async APIs. Nodejs is a single threaded environment, so in order to take full advantage of all the cores in your server you need to use some kind of clustering. That’s why the cluster module is in the Nodejs standard library.

We are not adding much complexity here: clustering is something you need to do anyway, whether you are using sync or async APIs.

Now this is the “surprise”: the cluster took 10.331 seconds to complete the 100 requests. That’s approximately the same performance than the async version! What’s happening here?

Modern CPUs and Operating Systems are very efficient doing context switches. A benchmark from 2010 estimated that a context switch takes between 2 and 50 micro seconds. I can only assume CPUs have improved since then, but it doesn’t really matter either. A few microseconds per context switch means a HTTP request can be stopped dozens of times and the overhead is likely to take less than 1ms in modern hardware, which will be hardly noticeable in most web applications.

Async I/O adds complexity to the execution flow of a program and is not noticeably faster than sync I/O in a multi threaded or multi process environment.

Some common objections to synchronous APIs

This might be true for multiprocess servers, but memory is cheap and it’s rarely the main bottleneck. I’d argue that your brain is more likely to be the bottleneck, so anything that you to do decrease complexity will be more valuable that saving RAM.

You might have an application, for example a chat, in which clients are idle most of the time and they only interact with the server sporadically. It seems a waste of resources to keep a process or thread blocked all the time waiting for the odd interaction. That’s true, but in those cases you can offload the connection management and message parsing to an async application server and handle the responses in your application with synchronous code.

So… should I use sync I/O in node?

No! The whole node ecosystem assumes that all your code will be asynchronous. Mixing synchronous and asynchronous code will lead to terrible results. If you are stuck with node, follow the beaten path and write async code. However, if you have the opportunity try to consider other sync environments for you next project.

Async I/O is also a superior approach in other environments that are not web applications, like GUIs, or client side code where multiple processes are not an option.

Lastly, some people will argue that async I/O is no longer problematic since ES7 introduced async and await. async and await are new keywords to handle asynchronous operations in a synchronous-like way. For instance, you can transform this code:

This is clearly an improvement, but it’s still more complicated than it should be.

async and await are wrappers on top of the Promise interface, and Promise is another wrapper around asynchronous calls. You still need to understand all those modes of operation. What’s worse, we can mix the three, leaking abstractions and making the code inconsistent.

Also, in the example, secondFunction doesn’t execute until firstFunction is finished. We have removed the concurrent execution that was the reason to prefer async programming in the first place. In a way, we have implemented sync semantics (and performance) adding layers of abstraction on top of the overcomplicated async API. But as we saw, the performance difference was not really significant to begin with. After all this long journey, wouldn’t have been easier to follow synchronous programming from the beginning?

« Cognitive load in programming: why the brain is the bottleneck
<!-- /.site-content>